Lewis Powell
10:41
have you started reading anathem yet?

Ben Heaton
10:41
No, but I did put it on a list of books I would like when my mom asked for such a list.
So I'm on the path to reading it.

Lewis Powell
10:43
excellent
i want to share with you some brief dialogue that does not contain plot spoilers, that will make it clear what I love about the book
does that sound ok?

Ben Heaton
10:44
Yeah.
Wait, if you haven't finished the book, how do you know if it has plot spoilers?

Lewis Powell
10:45
"If you can't test it, it's not theorics--it's metatheorics. A branch of philosophy. So if you want to think of it this way, our test equipment is what defines the boundary separating theorics from philosophy"

"Wow...I'll bet a philosopher would really jump down your throat for talking that way. It's like saying that philosophy is nothing more than bad theorics"

"There are some theors who would say so, but those people aren't really talking about philosophy as philosophers would define it. Rather they are talking about something that theors begin to do when they get right up to the edge of what they can prove using the equipment they've got. They drive philosophers crazy by calling it philosophy or metatheorics."
it doesn't spoil anything that comes before that passage, and if it spoils something after that passage, you have to fault stephenson, not me

Ben Heaton
10:46
It doesn't have the feeling of a spoiler passage.
So this book really was written for you.

Ben Heaton
10:47
That's close enough to being written for me that I think I'll enjoy it.

Lewis Powell
10:48
you will probably feel less of an impulse to write neal stephenson a thank you note for writing the book than me

So, I haven't been posting to LJ in forever, and I definitely forgot to, say, read my friend's page in the past, I dunno, 4-5 months? maybe more?

Point is, if you said anything important and wanted me to be aware, maybe post a comment letting me know.

Also, fun facts:
For anyone keeping score at home, my overall weightloss since my highest point ever (October 2005) is 120 pounds (give or take a couple). I am not sure which is more insane, the fact that I have friends who weigh less than the amount I have lost, or the fact that I was able to actually lose that much weight?

Luckily, I don't care as much about which of those is most insane, I care _most_ about the fact that I bought a jacket the other day that had no "X" in the size, which is, I think, a first since at least high school. The brand runs big, at least, on that line of jackets, but, it's not like some crazy brand that has insane size scales or anything. It's a legitimate "L".

Here are some things that I may not have mentioned to LJ yet:
1) The Alligator hardcore eats East Hollywood over Koreatown (sorry K-Town). I am living in a fun area with lots of stuff to do, and people I know, and basically, my social/home life has exploded with awesome.

I volunteered last night and this morning with the No On Prop 8 campaign.

I went in yesterday to do phonebanking, but I got cold feet (or maybe cold vocal cords?) and asked them to put me on data entry instead. So I helped clean up the call lists, removing wrong numbers etc.

This morning though, I got to go to the Hollywood Farmer's Market and do in-person volunteer recruiting, which was fantastic.

The thing about the phonebanking is that I wasn't really comfortable having to use a script, and while they provide you with a script for in-person recruitment, you're not supposed to be working directly from it, so much as taking it as a rough guide.

I was pretty excited that I got 7 people to sign up to come in as volunteers, out of the maybe 60 people I talked to or tried talking to.

Getting 7 people to commit may not seem like a lot, but it really is difficult to get folks to even talk to you in the first place, even when (or, I guess, especially when) they are already on board with defeating Prop 8.

I found that the best way to get people to talk to me was to mention that the yes on 8 campaign is outspending the no on 8 campaign 3 to 2, that recent polls are looking like prop 8 might pass, and that there's only 15 days left until the election to reach the undecided voters (and given the margin of error on the polls, it's the undecided voters who are going to determine the outcome).

This was my first time doing volunteer work (at least, as far as I remember), and I'm glad I've gotten involved. I'm going back on Tuesday to do more data entry, and I'm planning to do more volunteer recruitment next weekend as well.

one of the funnier onion articles I've seen recently:


also: my birthday is coming up soon.

The theme of this year's birthday is "Closer to 50 than to birth". 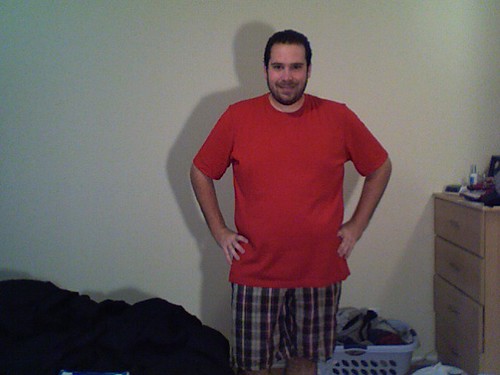 trying out a new style 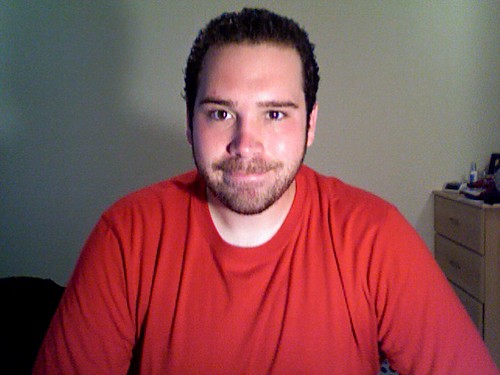 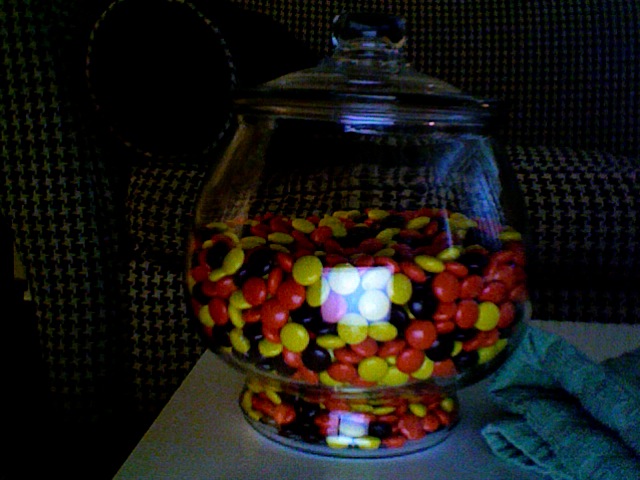 This is a jar of candy. It is my jar of candy and it is filled with 3 bags of Reese's Pieces from the grocery store.

I am not allowed to eat any of this candy.

Other people are allowed to eat this candy, and I am going to keep the jar stocked (though I might alternate candies over time).

The point of this jar is to train myself not to treat food as an option just because it is around.

When I go to parties, or when I have food around my house, I snack like crazy on it. I just grab a bunch and start eating. Usually, I am not even hungry.

So, this jar of candy is here for the express purpose of training myself not to snack just because the option exists. The candy dish sits out in the living room where I constantly get to see it.

It is remarkably tempting, but thus far (umm, about a day) I have avoided eating any Reese's Pieces.

No dessert foods (except at certain parties, such as for my birthday, or likewise large scale event).

No ordering hamburgers when I go out (possible to temporarily suspend this rule with 7 days notice).

Never order breakfast food when out at a restaurant.

Eat only cereal, toast, and/or fruit for breakfast.

It is hard to refrain from what is pleasurable. Especially since, with respect to food, this is not a single decision that can be made, but constant temptation. I pretty much have the option to eat bad foods any time I think of it.

So, if I am going to successfully alter my eating, it will require me to frame the plan in positive tasks. As in, "Eat such-and-such for breakfast" rather than "don't eat pancakes" or what have you.

"Snack on celery every day" rather than "don't snack".

This is the next thing I need to do with myself. After I fix my eating, I will have conquered my two most long standing issues standing between me and a happy healthy life.

I miscounted. Or misremembered my starting day.

I have 5 days remaining, not three, until the one year mark.